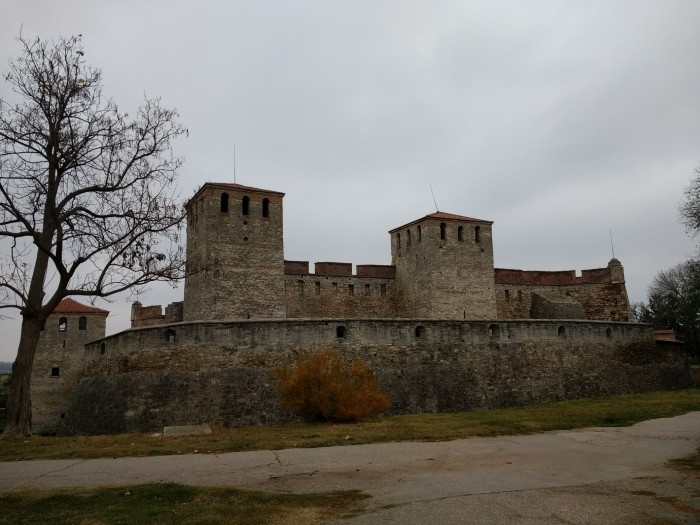 The Bulgarian town of Vidin is located in the northwest corner of the country on the border with Romania. Separating the two countries is the river Danube and a modern bridge. Vidin is an overlooked town, which not many people visit. In fact, during my stay I didn’t encounter a single tourist. Entering the town from the train station one is not immediately taken by the town. But spend a day on foot exploring what this town has to offer and one starts to view it in a whole new light. It’s jewels don’t immediately reveal themselves and require a dose of curiosity.

After locating a place in the town to change my remaining Romanian Lei into Bulgarian Lev, I focus on finding the address of my accommodation with the help of the Google Maps app on my phone. I am glad I didn’t take a taxi. Not only is my accommodation located not so far away, through walking the distance to it, I develop a feel for where I am.

My accommodation is situated in an old grey Communist-era low rise building. Inside the building, it’s less austere. On the level where the flat is located there are several plants on the balcony. Plants never fail to lift one’s spirits. The hosts, a middle age Bulgarian couple, are very warm with big hearts. Their flat is homely and aesthetically tasteful. Its light and warm. My bedroom I discover is very spacious and I have a double bed. It is perfect. I am offered Bulgarian tea. Ten minutes later Krasi one of my hosts returns carrying a vintage traditional blue tray containing a cup of tea, a pot of sugar and a separate plate with a generous wedge of homemade milk cake. It is awfully good and I feel very touched to be at the receiving end of such generous hospitality. 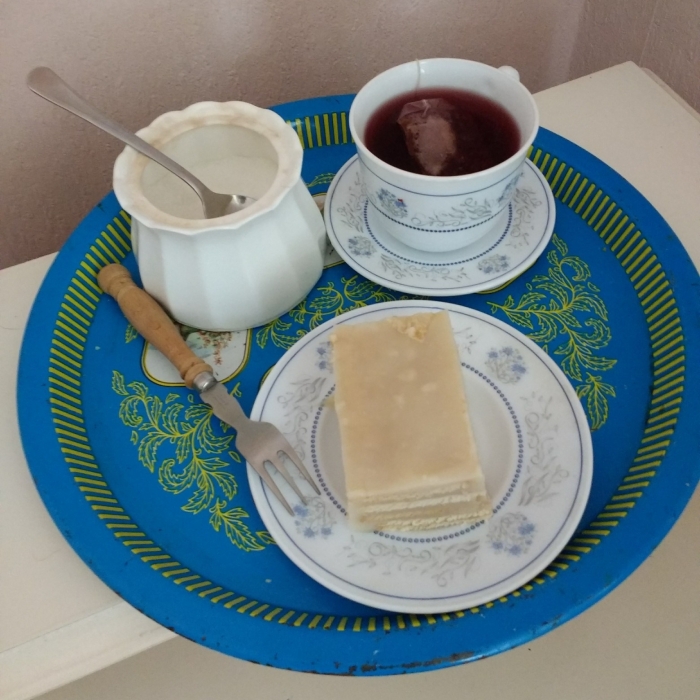 I’ve been up since 5.45am this morning and the temptation is very strong to go back to bed. But I want to seize the remainder of the day. After an interval of time spent in my room having my tea and trying too warm myself up, I leave my room to hit the streets of Vidin. Most of my neighbourhood is full of brutal boxy communist era flats. One could maybe be in a non descript middle Russia suburb. Yet with a smattering of more vintage architecture with an Ottoman tinge. Some of those older buildings look neglected. Vidin is not a wealthy town and is one of the poorer parts of the country yet it also has one of the richest and oldest histories. 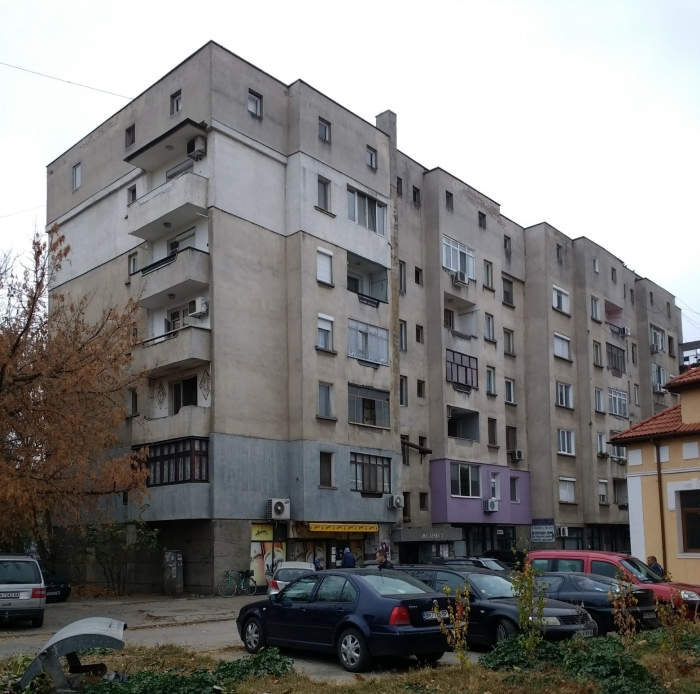 Residential housing block on the outskirts of town 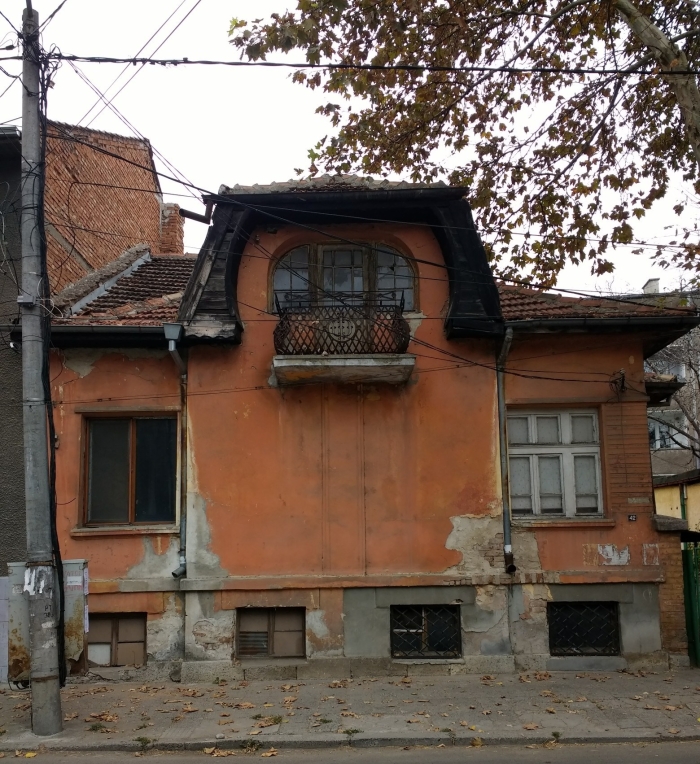 Back in the centre of town close to the train station, I aimlessly wonder the streets not venturing further than  and find a place to have some late lunch. I spot a canteen type diner with several different trays of local savoury and sweet dishes. I opt for the moussaka with a side of fried potatoes and another milk based cake for desert. After eating my food, I leave the restaurant and wonder some more before calling it a day and returning to my accommodation. 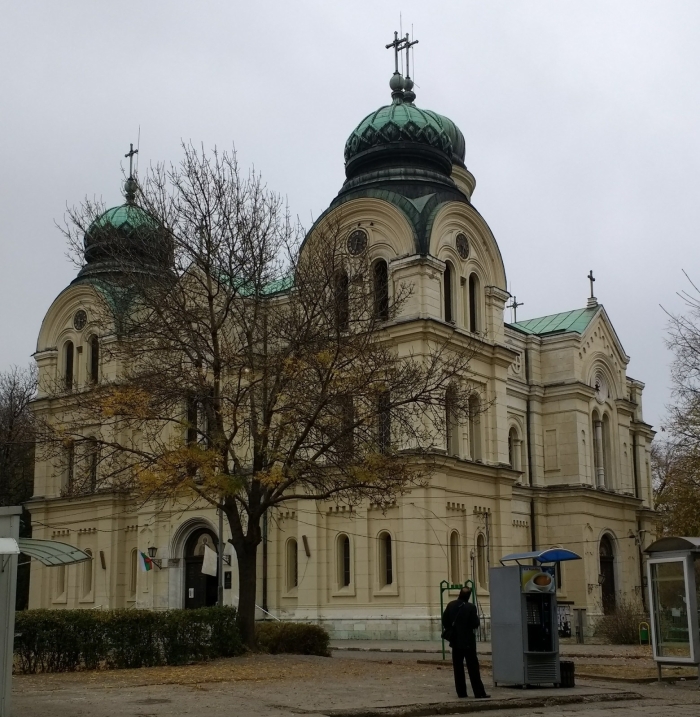 St. Dimitar monastery in the centre of town 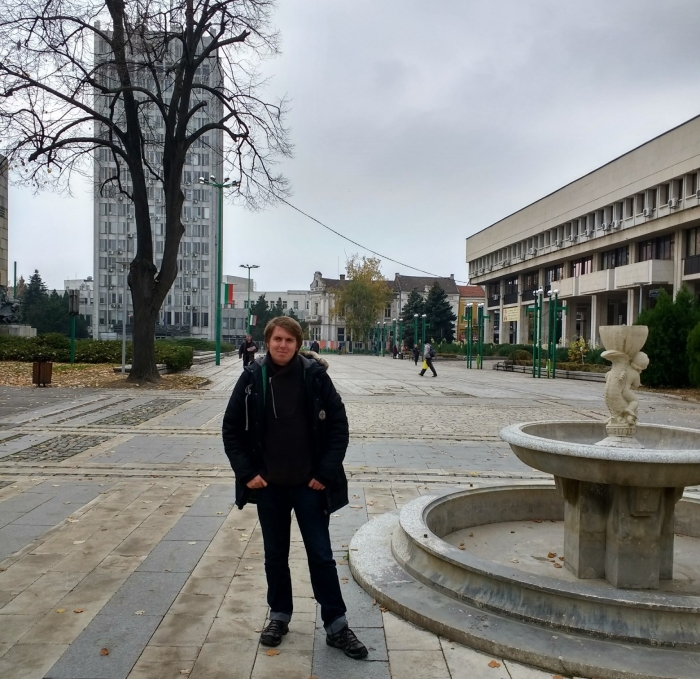 The next day is when things start to get cooking for me in this town. I walk back to the town centre and head for the old town district of Kaleto where the medieval Baba Vida fortress is located. Its the best preserved medieval fortress in Bulgaria. I approach the old town from an old walled entrance dating back to the times of the Ottoman Empire. 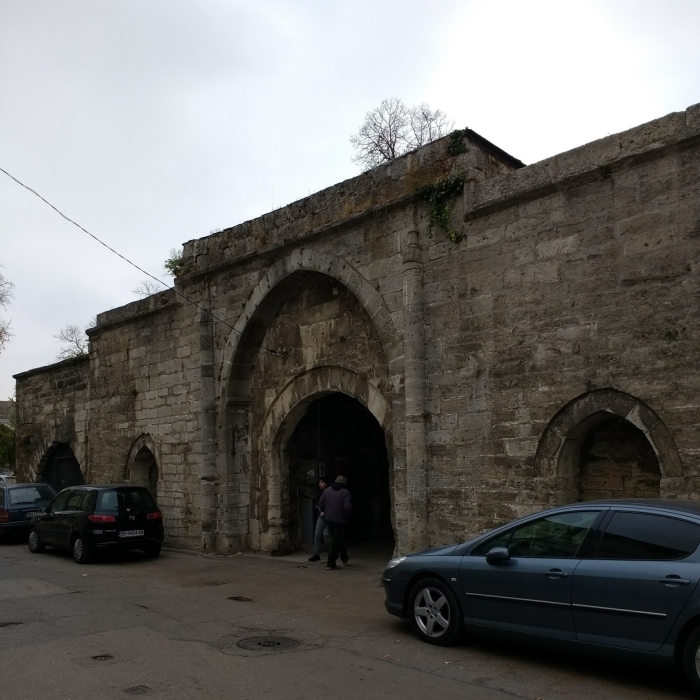 The entrance to the old town

One of the most distinct and unusual landmarks in the old town is a derelict and abandoned synagogue. The synagogue was built in 1894 and for a time was Bulgaria’s second largest synagogue. Vidin had a thriving Jewish community for five decades since the 15th century with the arrival of the first Jews from Spain. Most of the town’s Jewish population emigrated to Israel after the Second World War. There were plans to restore the synagogue back to its former glory during the 1970s and a decade later work was in fact carried out, but it was abruptly cut short with the fall of the Communist regime at the end of that decade. 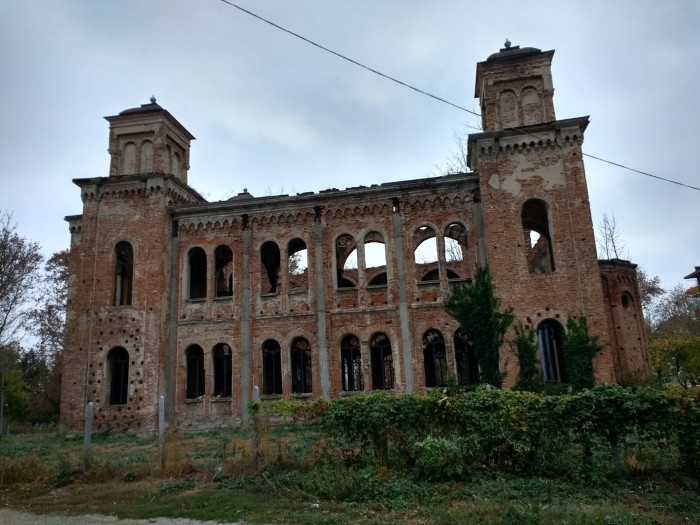 Nearby the synagogue is a tall monument overlooking the river Danube. The so called ‘Monument of Freedom’ was built during the Communist regime. It is a structure in the Brutalist architecture genre and a relic from the Communist era of Bulgaria’s history. 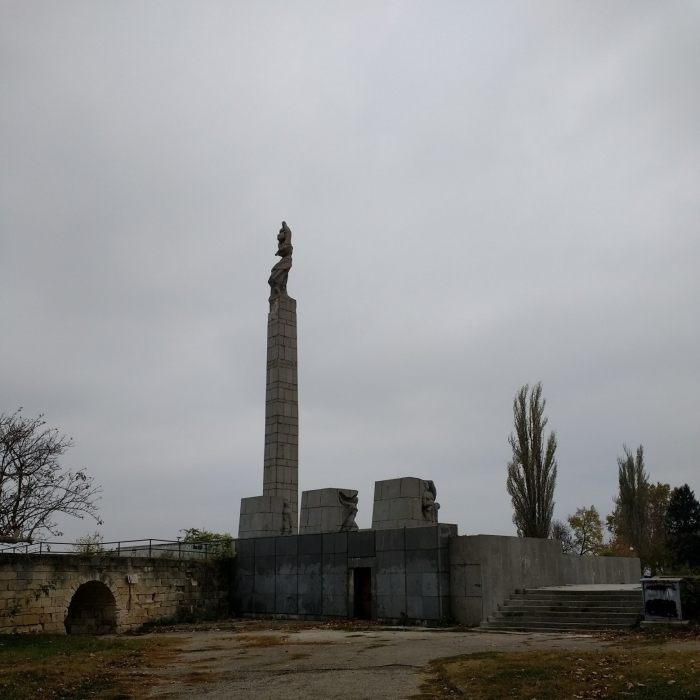 What is amazing though is the view of the river Danube, the second longest river in Europe after the river Volga in Russia. The river covers most of the border between Bulgaria and Romania, before discharging itself into the Black Sea in northern Romania close to the Ukrainian border. On a clearer day one can fully see the bridge in the distance connecting Bulgaria and Romania. 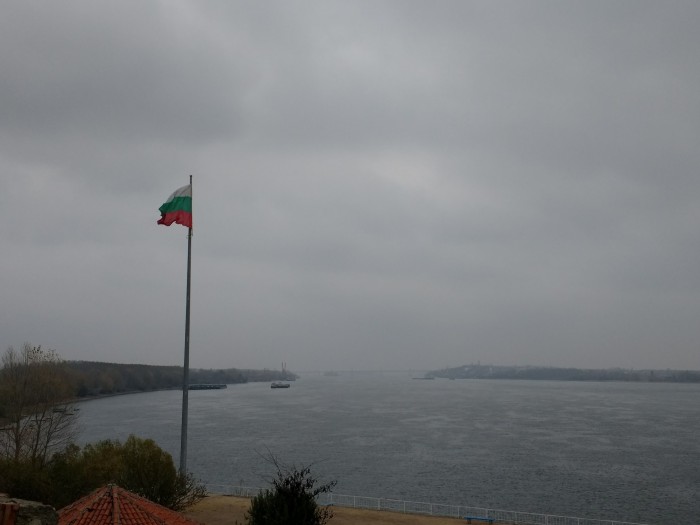 Only a short walk away is the town’s main landmark, the Baba Vida fortress, which literally translates to ‘Grandmother Vida’. The fortress dates back to the 10th century and was contracted on top of the site of an old Roman landmark called Bononia. The origins of the castle is based on a legend focused on a Bulgarian King and ruler of Vidin who had three daughters; Vida, Kula and Gamza. Before he died he divided his kingdom between his three daughters. His eldest daughter, Vida, was given the town of Vidin of whom the town is named after. And it is in this town that she built this fortress, where she lived unmarried and insolation. The fortress, Grandmother Vida, is named after her.

Throughout the town’s history the fortress has served as an important strategic base. During the 500 year long Ottoman rule of Bulgaria, the fortress was used as a prison and a base to store weapons. It is an impressive structure and little changed since its foundation. I spend some time walking around the complex and climbing one of the narrow stone staircases to reach the top level. At one point I almost lost my balance on the steps. There are not many protection railings as it isn’t designed for mass tourism. As a result one needs to be on their guard when inside. 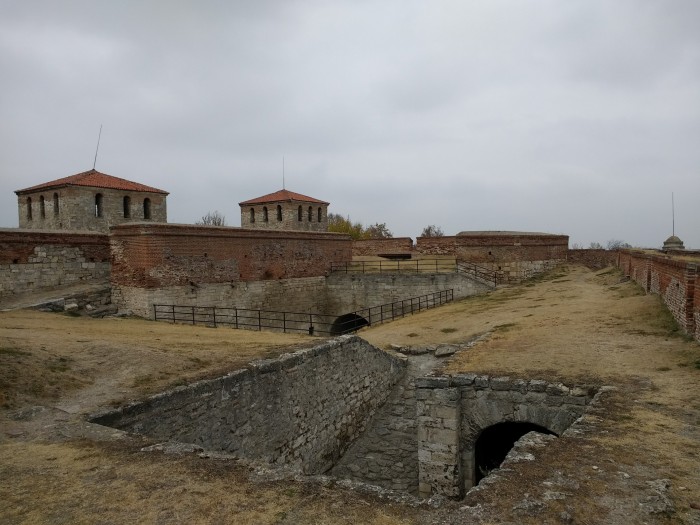 At the top of the fortress

Other sites in the old town include the Krastata Kazarma museum, built in the classic Ottoman style. It was a military barrack during the Ottoman rule. Today it is the town’s ethnographic museum. 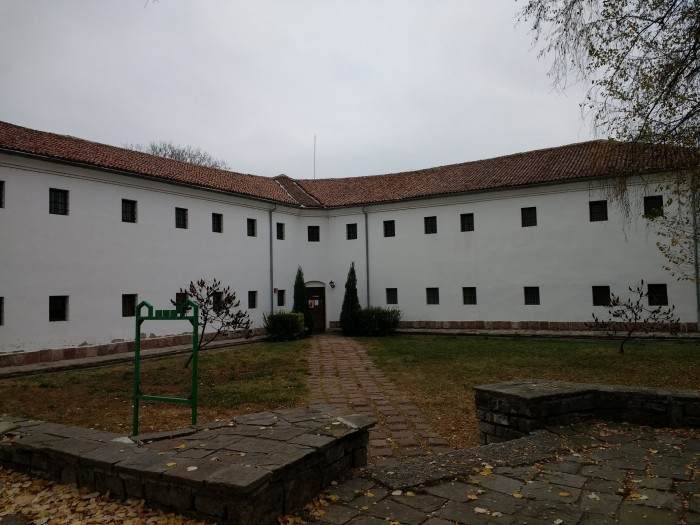 Else where in the old town is a mosque named after Osman Pazvantoğlu. Osman was an Ottoman soldier who was the governor of Vidin in the late 18th century. There is also a library in town named after him. Very near the mosque is an orthodox church named after St Panteleymon. 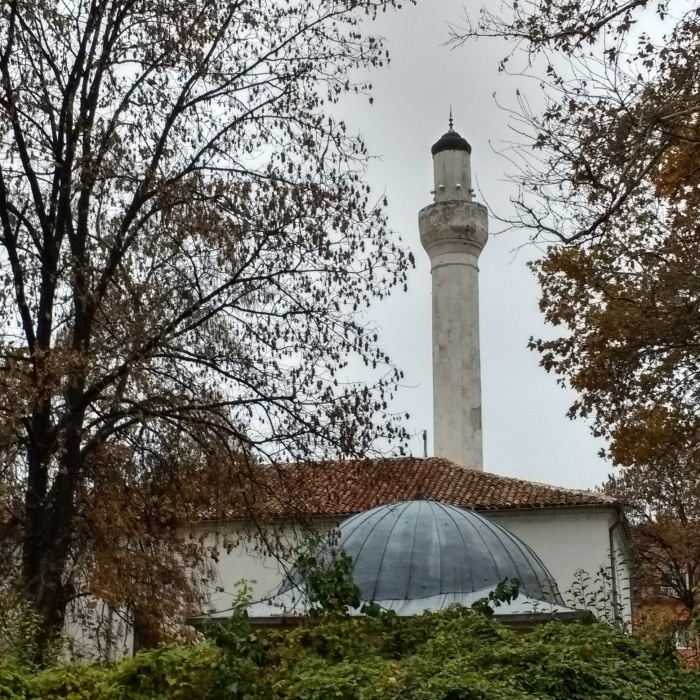 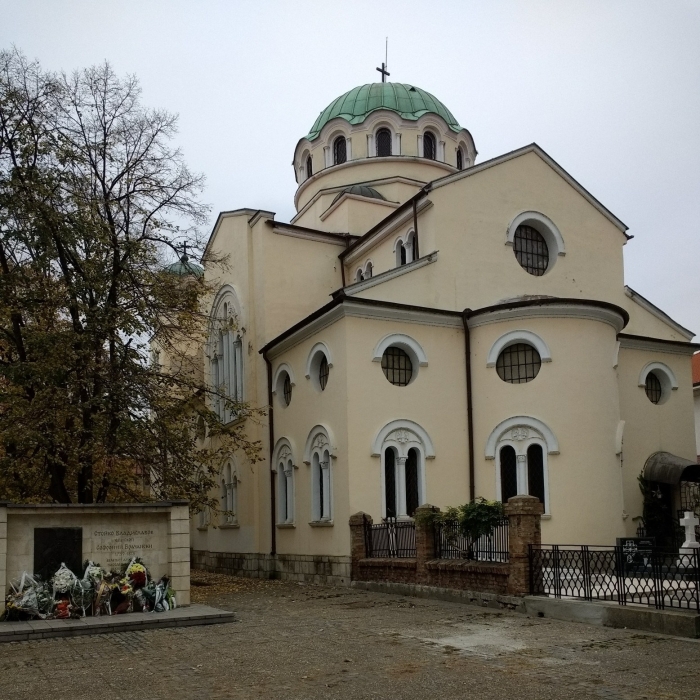 On the edge of the old town by the Danube, is the Nikola Petrov art gallery. Petrov was a Bulgarian painter born in Vidin in 1881. Sadly his life was cut short by tuberculosis and he died at the age of just 35. The gallery has many of his works in its collection. However when I visited only a few paintings in one room were on display.  One small painting by Petrov on display is his painting of the Baba Vida fortress. 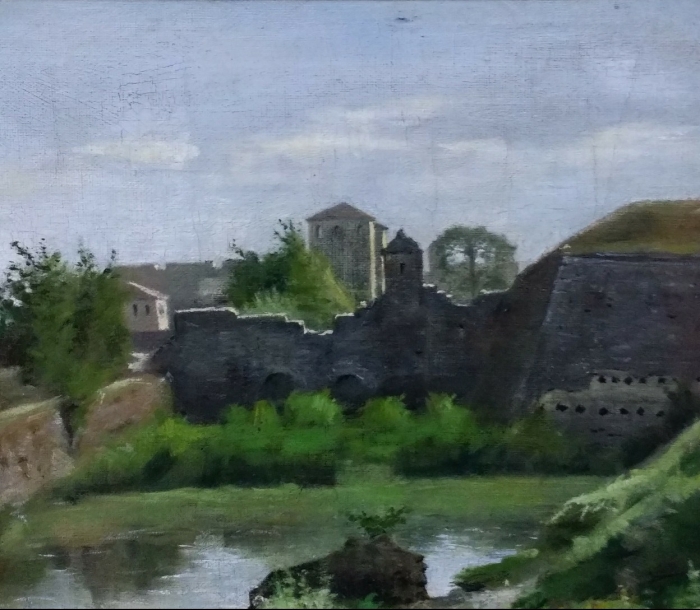 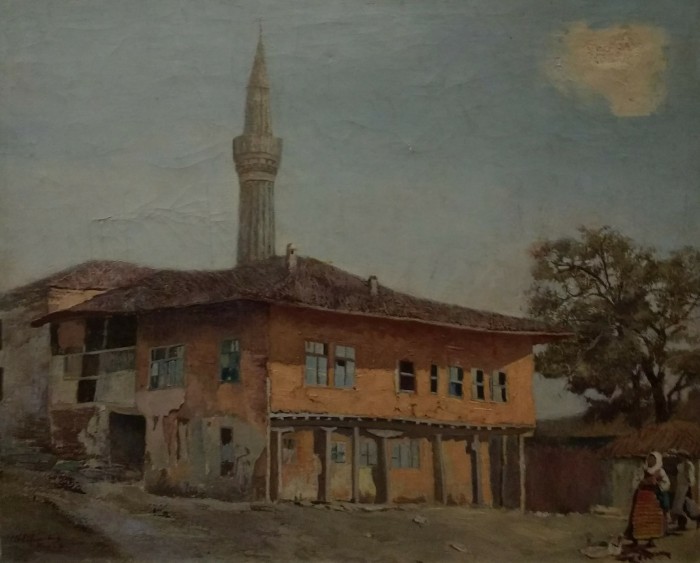 Ivan Ivanov’s painting of the Osman Pazvantoğlu Mosque from 1938 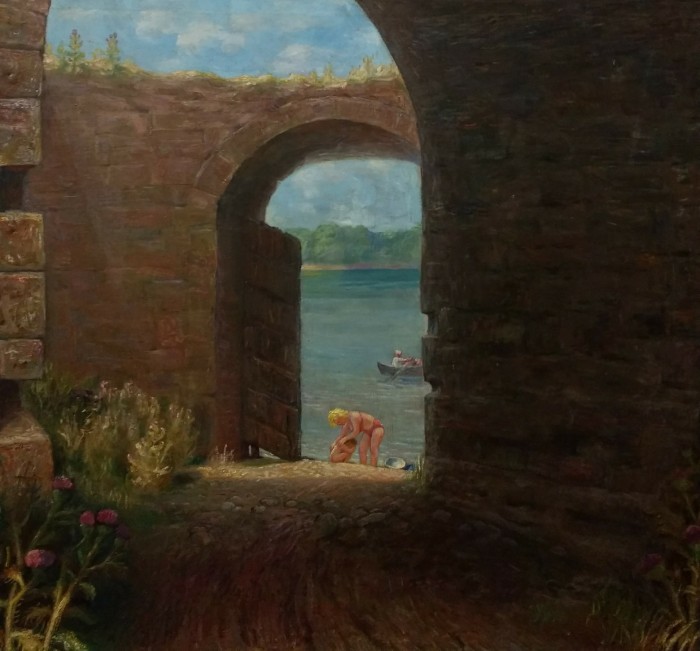 After visiting the art gallery, I take a walk along the banks of the river Danube. During my walk I cross paths with two young men. One of them is very drunk and proceeds to give me a slurred a rambled discourse of the history of Vidin in broken English. His friends asks me, ‘What the fuck are you doing in Vidin, man?’. He then adds that he spent three years living in Derby. He looks at his friend already halfway through his drunken impromptu history lesson and says, ‘Just ignore my friend. He’s crazy. He doesn’t know what the fuck he’s talking about’. I wish them both goodbye and good luck and I head back to my accommodation on the outskirts of Vidin.