Last week I embarked on a road trip from Plettenberg Bay to Durban. Along the way I covered all of the Eastern Cape breaking the journey in Grahamstown, the Transkei and Kokstad on the border between KwaZulu Natal and the Eastern Cape.

Driving through much of the Eastern Cape, especially the Transkei region, I am reminded of the vast sertão of northern Brazil; a very poor region, which many families leave and make the long journey south to São Paulo. Likewise, many Xhosa families leave their traditional homelands in the Eastern Cape for the big cities like Cape Town and Johannesburg. The Cape Flats in Cape Town are where many reside.

As I drive east of Grahamstown, I pass through King William Town. My preconceptions before arriving were of a town similar to Grahamstown with Victorian architecture. What I stumbled on was more like a slice of the wrong side of LA. There is nothing remotely ‘kingly’ about it. Ol’ Dirty Bastard Town would make a more fitting name. I lock all my car doors and keep driving. As I leave the N2 and head on the R63 there are directions for towns like Fort Beaufort and Alice. Those towns are historically significant since they are where Nelson Mandela received his further education. Driving on the stretch of the R63 between the towns of Bisho and Komga you drive through the heart of the Eastern Cape. Small houses of many different colours, like postage stamps from a distance, dot the landscape. Connecting back on the N2, I notice that the landscape has changed and I am now in the Wild Coast region. A long truck carrying big slabs of rectangular gray bricks is forever in my way and I can’t go more than 40km/h. At one point I seize my chance and rev my little Polo Vivo to kingdom come. I make it by a whisker and consider myself very lucky. I am now a mess of adrenaline. I also notice that the sun is going down and consider stopping somewhere to break the journey. My aim is to be close to Qunu, so in the morning I can go there early. I pass through the town of Butterworth; a mess of a place a la King William Town. I don’t feel very comfortable stopping here but the directions to a hotel lift my spirits. When I arrive at the hotel I feel like I’ve just landed in the middle of the Bronx and duly resume my journey on the N2. The next town Dutywa is not much different but on a quiet side street I find a relatively appealing guesthouse called Kowethu B&B run by a kind elderly Xhosa lady. Alas I am too late for dinner (which must be requested in advance) and my only feasible option is KFC in town. My heart goes out to all the vegetarian and vegan travellers in my shoes. 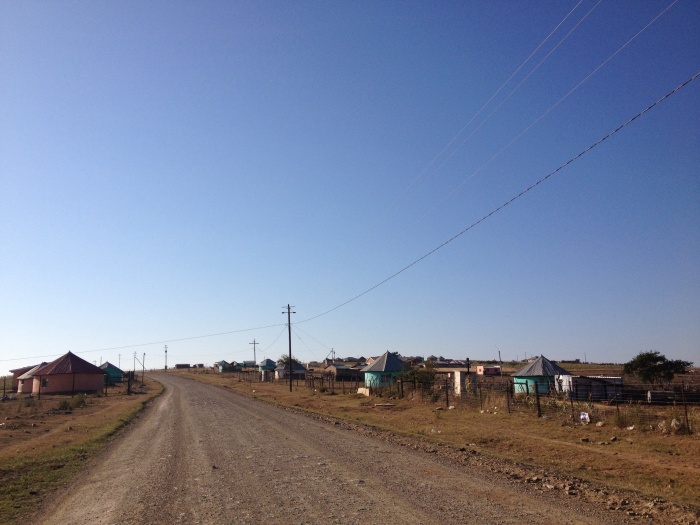 Mveso – the place where Mandela was born

On the way to Qunu, I exit the highway and drive along a newly paved road towards Mveso. This is the place where Mandela was born on 18 July 1918. His father was appointed the chief of Mveso by the king of the Thembu tribe. However following a dispute with the local white magistrate, he lost his chieftainship status as well as the majority of his land, cattle and money. The family subsequently moved to the nearby village of Qunu. On the road to Mveso, I get my first real taste of the Transkei heartland away from the N2. This is real Xhosaland. Several traditional Xhosa huts populate the landscape. The dusty, semi-arid, windswept terrain here is the opposite of the fertile lush Garden Route. This is no Wilderness or Tsitsikamma. I keep on driving until the paved part of the road morphs into a jagged and uneven dirt one. I drive a little further before turning back towards the N2.

At the Nelson Mandela museum in Qunu I am greeted by my tour guide, Zim, who guides me around. Within the complex there are a few rooms with info and photos chronicling his life. From the museum complex you have a spectacular vista over Qunu and the vast veld where Nelson played as a child. These abundant fields were an important part of his early development as he says in his own words;

In the fields I learnt how to knock birds out of the sky with a slingshot, to gather wild honey and fruits and edible roots, to drink warm, sweet milk straight from the udder of a cow, to swim in the clear cold streams and to catch fish with twine and sharpened bits of wire… I learned to stick-fight  –  essential knowledge for a rural African boy. From these days I date my love of the veld, of open spaces, the simple beauties of nature, the clean line of the horizon.

When I read those words I think of the San people; the original people of Southern Africa who had a very deep and special connection with nature.

His other name Madiba comes from the Madiba clan in Xhosa society, named after a Thembu chief who ruled over the Transkei region in the eighteenth century. Nelson is frequently referred to by his clan name, Madiba, as a sign of respect. His actual first name given to him at birth by his father is Rolihlahla which in Xhosa literally translates as ‘pulling the branch of a tree’ and colloquially means ‘troublemaker’.

Right next to the museum is the first school he attended, the Qunu Junior Secondary School. It was here on his first day of school that his teacher Miss Mdingane gave him his more familiar Christian name Nelson. A crowd of children are gathered outside. Despite its historical significance, it is a very modest school and from the outside the classrooms seem quite basic. 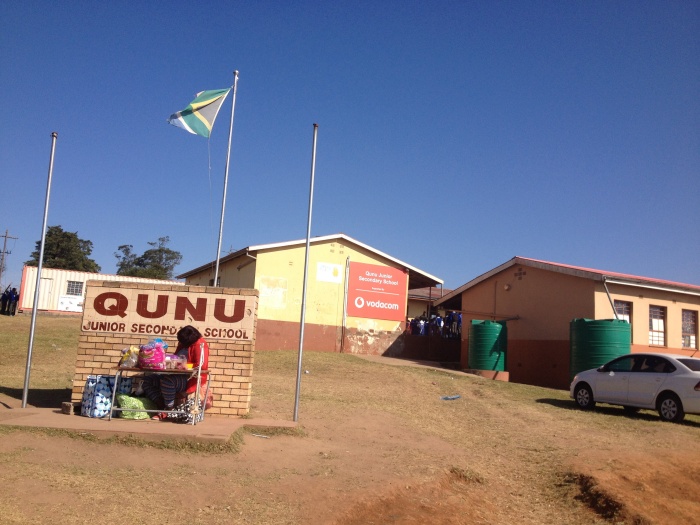 Afterwards I drive to his home, where he spent the remaining years of his life since being released from prison in 1990, located directly off the N2. At the gates I am greeted by a young man who works on the grounds of the estate. I am told that I cannot enter. Nelson’s grave is located within the grounds and that too is out of bounds to the general public. Sadly much of the surviving Mandela family is trapped in an ugly car crash like mess of never ending feuds; a very sad state of affairs and poor old Nelson must be spinning in his grave or maybe he just doesn’t care; his nature being of someone who avoids this toxicity.

A group of Zulu visitors arrive at the estate just moments after me. They too get rebuffed. No luck then for any of us. The Nelson Mandela Museum in nearby Mthatha is currently closed for refurbishment. I have little to no desire to pause in Mthatha. After the non stop assault of King William Town, Komga, Butterworth and Dutywa, I just want to press on to Natal.