The Romanian born Constantin Brancusi was a leading sculptor of the 20th century and a pioneer of modern art. My first encounter with the great man was in Paris, the city where he lived for many years and where he met and became friends with many of the great artists, writers and poets of the 20th century such as Pablo Picasso, Amedeo Modigliani, Marcel Duchamp, Guillaume Apollinaire and Ezra Pound. His Parisian studio still stands today on the same site where the Pompidou Centre of Modern and Contemporary Art is located and he is buried in Montparnasse Cemetery along with other greats like Charles Baudelaire, Serge Gainsbourg and Jean Paul Satre.

From the city of Timisoara, located in the west of Romania, I embarked on a bus ride lasting nearly six hours to reach the country town of Targu Jiu. I was the only tourist on the bus and most of the journey comprised of driving through rural and provincial Romania. The Romanian countryside is wild, raw and authentic. I notice this especially on the road approaching Targu Jiu. Watching all this scenery from the bus window I already develop a mental picture of the land Brancusi grew up in as a young boy. Brancusi came from very humble beginnings. He was born in 1876 in a small village called Hobita about 20 kilometres outside of Targu Jiu. Both his parents were poor traditional hard working mountain people. His development as an artist began in this rural part of the country where he would frequently carve objects from pieces of wood. Today one can visit the wooden house in Hobita where he grew up although it’s a replica of the original construction.

Targu Jiu is a town with several points of interest. Yet my principle reason for visiting was to see the large outdoor sculptures created by Brancusi in the 1930s as a homage to the Romanian soldiers who fought during the First World War. Beginning at the Constantin Brancusi Memorial Park by the Targu Jiu river is his work, The Table Of Silence. The work comprises of a circular table and twelve hour glass objects made of stone positioned in such a way to resemble a clock with each of the hour glass objects representing the numbers on a clock. 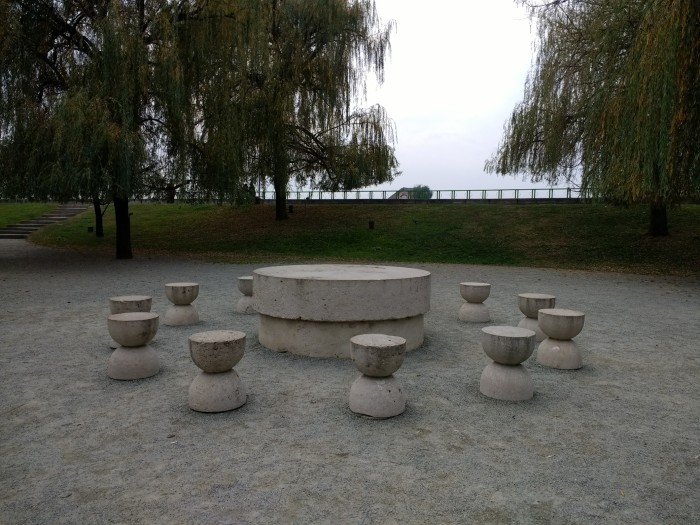 The Table Of Silence

Directly facing this work is a path leading towards another work by Brancusi entitled The Gate Of Kiss made of travertine marble. One each side of the two columns of the work is a circular emblem representing lips. This work is of the socialist realism style, which was the main genre of sculptures made during the time of the Soviet Union until its collapse in 1991.

The Gate Of Kiss

From the park, I walk along Calea Eroilor or Heroes Street – named after the Romanians who fought during WW1 and to whom the sculptures are dedicated to, until I reach another park where the final and arguably most epic work of Brancusi’s Targu Jiu works is located. The Endless Column is an almost 30 metre tall sculpture consisting of 17 rhomboidal modules. It is an iconic work of outdoor sculpture and is occasionally cited as one of the greatest works of modern outdoor sculpture.  The work is a symbol of ‘the infinite’ and in the context of the Romanian soldiers who lost their lives in World War One, a tribute to their ‘infinite’ sacrifice. For me it is a very spiritual work. It goes beyond the concepts of time and space. It is timeless and eternal, defying any representations or labels of any specific period in time. The sculptor, art writer and Brancusi historian Sydnei Geist called the work the high point of modern art. 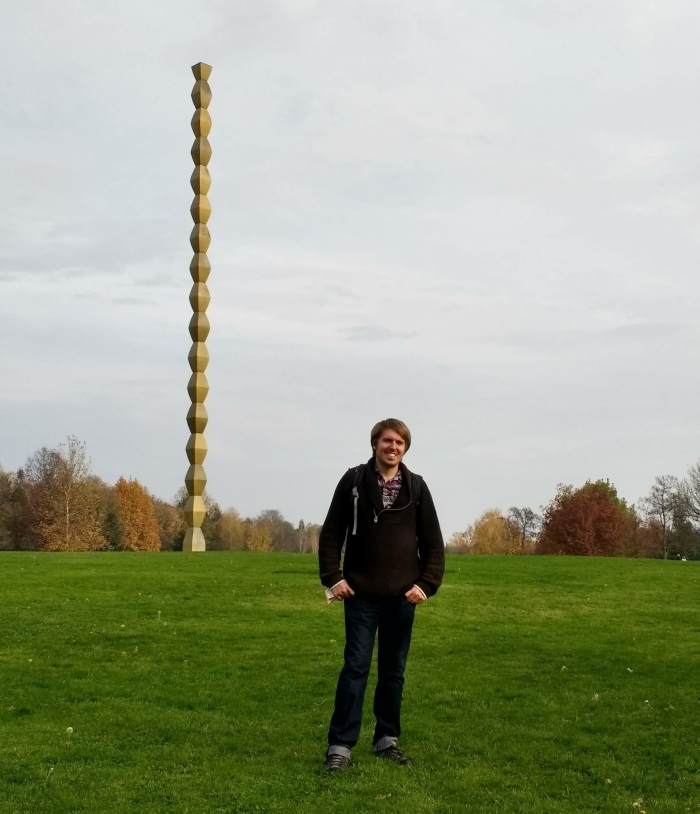 By The Endless Column

During the 1950s there were plans by the Communist government of Romania to destroy the column but thankfully those plans were never realised. In fact, after the fall of communism in the country, there was a lot of renewed interest in the column and plans were carried out to restore it after years of neglect.

Other sites that are worthy of attention in Targu Jiu include the city’s small art museum located at the top of the Brancusi Memorial park. When I visited I encountered several paintings and sculptures by local and well known Romanian artists. Some of the sculptures were created by lesser known contemporaries of Brancusi and there is one work in the museum created in collaboration with the great man himself. I particularly recommend the room containing a collection of beautiful religious icon paintings some dating back all the way to the 17th century. 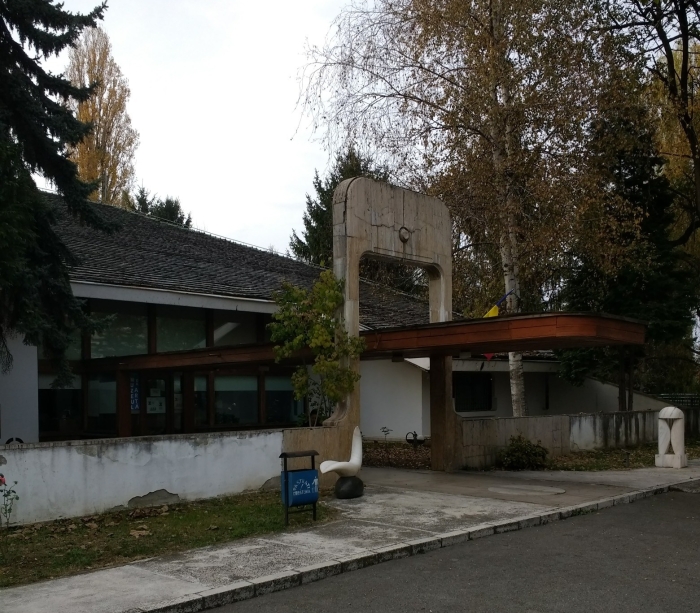 A lesser known site in the town is the Iosif Keber Memorial House located in an architectural masterpiece of an old house featuring a collection of his paintings and an art library.

About 100km south of Targu Jiu is the town of Craiova. It was in this town where Brancusi attended the Craiova School of Arts and Crafts from 1894 until 1898 and produced some of his earliest sculptures here. The Craiova Art Museum is located in the Constantin Mihail Palace. It is an opulent building with an almost Versailles like interior, which was built between 1898 and 1907 by the French architect Paul Gottereau. The palace was named after Michael Constantine, who was a member of one Romania’s richest families.

The Craiova art museum contains a wealth of paintings by Romanian artists yet it is the room containing a collection of Brancusi works, which is my reason for visiting. One of the most important of these works is his sculpture from his series of sculptures entitled The Kiss, his take on Rodin’s work of the same name. After Brancusi first arrived in Paris in 1903, he spent some time in Rodin’s studio but left after two months stating, ‘Nothing can grow under big trees‘. Brancusi held the great master Rodin in high regard yet at the same time he didn’t want to be stuck in the past and in his shadow. One can be too enfolded and trapped in the realms of a great artist. Brancusi though was an innovator and a visionary, and in order to grow, challenge and change the face of something one cannot be for too long in the presence of a master. This was the same with the Venetian painter Tintoretto who only spent a very short amount of time in the studio of the master painter Titian. As brilliant as Titian was, Tintoretto was also, like Brancusi, a visionary artist, and found being in the shadow of a master artist for too long stifling. He wanted to break free and develop his own style.

The original Kiss sculpture at the Craiova Art Museum

The Kiss is a ground breaking work of modern art. What makes the sculpture in the Craiova art museum so special and unique is that it is the original sculpture Brancusi created, which would later manifest into a full series of sculptures of the same name. When you look at Rodin’s Kiss sculpture and then at Brancusi’s sculpture of the same name it is clear what Brancusi wanted to do. Rodin’s sculpture is a masterpiece of classical art, in the style of the greatest sculptures from the Classical Greek period. But Brancusi’s objective was to create something new. In his sculpture he breaks down Rodin’s sculpture to its most basic and essential essence. It’s almost like he’s on a mission to chisel something and remove all its components leaving behind just its most essential and primordial core – that which is eternal and exists beyond the straightjacket of physical structures. And this is the reason why it is of such importance in the history of modern art.

The rest of the Brancusi collection in this part of the museum is made up of miscellaneous works by him created from as early as 1894 at the age of 18 when he was studying at the Craiova Art School until 1913 when he was already an established artist living in Paris. The earliest of these works is a wooden chair he made whilst a student at the local Craiova Art School. He was clearly a precociously talented artist judging by the skill and details of the chair and the age he was when he made it. Furthermore, just before he enrolled at the school he created from scratch a violin. His technical skill could never be faulted yet what makes The Kiss such a ground-breaking work was in its re-definition of sculpture as an art form itself. 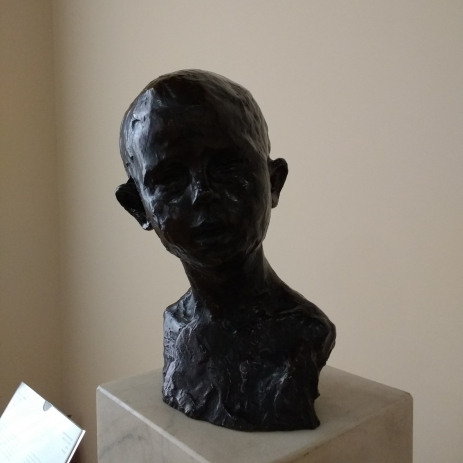 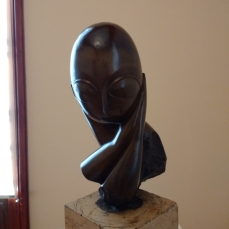 Other Brancusi works in the Craiova Art Museum

The sculpture he made of the Roman emperor Vitellius from 1898 during the first months of his time at the Academy of Fine Arts in Bucharest is a perfectly fine work in the classical tradition. His sculpture of a young boy he made in Paris in 1906 is an emotive, sensitive and skilful work with the influence of Rodin being rather strong. Both these works demonstrate tremendous skill and talent yet Brancusi was still finding his way. Where The Kiss stands out is in its originality and as a work of art with no connections to any great sculptors or art movements of the past. With this work Brancusi developed an art form that was not only entirely his own, but also a work which changed the face of sculpture during its time.